The Indianapolis Colts' roster has been completely shaken up over the last few offseasons, but now it already ranks as one of the best in the National Football League.

INDIANAPOLIS — It takes time to build a roster.

While some believe there is an "easy button" or quick fix by throwing money at free agents so your team can "win now," to build truly sustained excellence it takes a lot of patience.

For Indianapolis Colts' third-year general manager Chris Ballard, he took the aging roster he inherited and turned it into a playoff team by his second season, flipping the majority of the players on the roster and replacing them with younger, faster, stronger players who created a foundation for years to come.

He didn't do it by spending the Colts' abundant cap space, but rather by nailing many of his draft picks as well as the modest free-agent acquisitions that he did make.

The work that Ballard has done has not gone unnoticed, as ESPN and Pro Football Focus recently ranked the Colts as having the 10th-best roster in the NFL.

"We dove into the Pro Football Focus database and ranked every roster as it stands right now, focusing on the expected starters," ESPN said. "PFF grades every player on every play of every game of the NFL season, allowing us a comprehensive look at what each player has to offer for the upcoming season. Projected starting lineups on offense and defense are provided, including our player grades from the 2018 season."

Here's are ESPN/PFF's projections for the Colts' starting lineup heading into training camp: 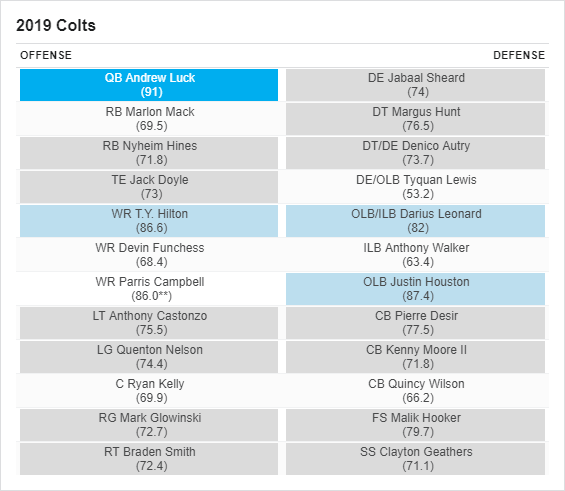 They then broke down each team's biggest strength, weakness and an X-factor for the upcoming season. Here is what they had to say for the Colts:

"Biggest strength: Now finally healthy, Andrew Luck led his team into the postseason last year with stellar performances down the stretch. He ended the season with an elite overall grade of 91.2 that ranked third among qualifying quarterbacks, and his clean-pocket, big-time throw percentage of 5.4% tied for eighth among those with at least 200 clean-pocket attempts. He's as good as they come, and the Colts' offense will continue to hum as long as he's at the helm."

You can make an argument that having a top-level franchise quarterback is one of the biggest deciding factors when it comes to winning and losing in professional sports, so there's no argument here.

The fact that Luck is experiencing a roster being built around him that people consider among the top 10 in the league could mean huge things on the horizon for the Colts.

Luck is not only healthy, but is entering his second season partnering with head coach Frank Reich and offensive coordinator Nick Sirianni. With a deep, diverse group of weapons surrounding him as well as one of the league's top offensive lines up front, what won't this offense be capable of?

"Biggest weakness: Entering the 2019 season, the Colts' weakness is the same as it was a season ago. Cornerback has long been the Achilles' heel of this defense. In fact, the last time a Colts corner graded above 80.0 was 2014. And while Pierre Desir -- the Colts' highest-graded cornerback in 2018 -- played admirably at times, he still ended the year with a 73.9 coverage grade, 27th among cornerbacks."

This is where I think a big misconception crops up regarding the Colts' defense. Heading into last season, the Colts' cornerback group was a huge question mark. Pierre Desir, Kenny Moore II and Quincy Wilson all looked good down the stretch in 2017 (although a shoulder injury ended Desir's season prematurely), and all were to be relied upon to carry the team's corner group in 2018. The big question was their lack of experience and consistency.

Can anyone look at what these three did for the Colts in 2018 and say it's the Colts' weakness? I can't agree.

Desir became one of the league's stingiest cover corners using his length and abilities to harass receivers. Moore played both outside and in the slot and became a highly productive pass rusher, racking up three sacks and two interceptions over the Colts' final three games of the season. Wilson was used like a chess piece for coordinator Matt Eberflus, playing him in various spots in multiple formations, answering the call wherever needed and doing it at a high level.

In a zone defense from which the Colts primarily operate, receptions are going to be given up — almost by design — so it can make things look worse than what it is. In this defense, if you're going to give up the reception, don't give up any yards after. The Colts' cornerbacks actually did a great job doing what was asked of them (and beyond).

If we're looking ahead to 2019, the Colts have that trio of corners as well as rookie second-round pick Rock Ya-Sin, Jalen Collins, Nate Hairston and rookie fifth-round pick Marvell Tell III behind them.

"X factor for 2019: The offensive line. From 2012 to 2016, Luck was hit as he threw a whopping 50 times, which is still a record high for a quarterback in his first five years in the league. Over that same span, he was either sacked or hit in the pocket a staggering 207 times, 34 more than the next-closest quarterback. Last season was a different story, however. He was kept clean from pressure on 70.5% of his dropbacks and was sacked just 18 times. The effects of an improved offensive line were obvious, and it's imperative that it continues this excellent work this season."

I think most people have bought in to the fact that the Colts' offensive line has changed for the better. However, their level of play changed so drastically, so quickly, that I think people want to see an encore before they become full-on believers.

It's no doubt that this starting five of Anthony Castonzo, Quenton Nelson, Ryan Kelly, Mark Glowinski and Braden Smith plays lights out as a team, both as run blockers and in protecting Luck. Another year of keeping Luck upright and opening huge holes for running back Marlon Mack will have people showing even more praise on the offensive front and may put more of a spotlight on Glowinski and Smith, whom people generally know the least about — for now.

The Colts and their roster are getting some attention from just about all around this offseason, as Bleacher Report recently declared that Luck has the sixth-best supporting cast of any quarterback in the NFL.

"While they might not be as deep at the offensive skill positions as the San Francisco 49ers, a running back-wide receiver-tight end trio of Marlon Mack, T.Y. Hilton and Eric Ebron gives the Indianapolis Colts an edge.

Mack and Ebron will have to prove they can sustain their production, but Indianapolis does have insurance if either fails to do so. They're looking better than they have in years at wide receiver after getting Hilton more support."

Luck, the maestro and the straw that stirs the drink, no longer carries any big question marks. He returned healthy from 2017 shoulder surgery to look like a true, legit MVP candidate and looks to be one of the award's front-runners in 2019. He needs his supporting cast to make the offense move, though.

Starting with the offensive line, which makes everything possible, the Colts appear to be in good hands like we've briefly touched on. The Colts had some dominant performances on the ground last year, and Luck was the least-sacked quarterback in the league. Nothing gets very far without the solid play from the line.

The Colts have a diverse group of running backs, led by Marlon Mack, who can perform any duty that a running back platoon should be able to. Mack brings a little bit of everything, as he has good vision, hits the hole hard and can take the ball downfield. Nyheim Hines is the group's top pass-catcher, but he has arguably unrivaled speed and can pick up some yards between the tackles well for someone with his 5-9, 196-pound size. Spencer Ware, Jordan Wilkins and Jonathan Williams all bring size, power, vision and can grind out tough yards on the ground. With what we've seen to this point, the group has some quality pass protectors in it as well.

Like the running backs, the Colts' group of receivers is a well balanced group with a blend of abilities. Only lacking size, T.Y. Hilton (5-10, 183) is one of the very best receivers in the game. He's got great speed, agility and hands, and he runs high-quality routes that consistently get him open. Devin Funchess brings size (6-4, 225) and playmaking ability, especially in the red zone. Parris Campbell and Chester Rogers are a pair of dangerous guys who can line up in the slot or outside and make plays with the ball in their hands. Deon Cain generated a lot of excitement last year in training camp, using his downfield speed and knack for making acrobatic catches, before an ACL tear claimed his season. He is expected to be back for this year's camp. Zach Pascal stepped up for the team whenever needed last season and pairs solid route running with vice grips for hands.

Last, but not least, is the Colts' tight end group, which may still be the best in the league from a whole-unit standpoint. Pro Bowler Eric Ebron led all NFL tight ends in touchdowns last season with 14, but the Colts are getting back another Pro Bowl tight end back this year in Jack Doyle, who had hip and kidney injuries derail his 2018 season. Mo Alie-Cox and Ross Travis are two very intriguing prospects worth getting excited about as well.

With Reich and Sirianni pulling the strings, the Colts' offense should be capable of pulling off whatever gameplan they put together on a weekly basis.

Flowers, who led the NFL in yards per kickoff return, was named to the PFWA's All-Rookie Team as a kick returner.

The Colts over the last few weeks have conducted several interviews for the team's head coaching position. Here's a recap of where things stand:

Mock Draft Monday, our weekly roundup of experts' predictions for who the Colts will take in the NFL Draft, is back for 2023 this week with a focus on quarterbacks, as well as a few Day 2 selections. Check it out below.

Martindale's aggressive defense helped propel the Giants to the playoffs in 2022.

Kafka spent five seasons coaching for Andy Reid with the Kansas City Chiefs before joining the Giants in 2022.

Quinn's Cowboys defense has helped Dallas reach the playoffs in each of the last two seasons.

The Bengals' offense, under Callahan, has ranked seventh in points per game in each of the last two seasons.

Bisaccia has 21 years of experience as an NFL special teams coordinator.

Saturday spent the final eight games of the 2022 season as the Colts' interim head coach.

Keep track of all updates to the 2023 NFL schedule, including early announcements, international games & more!

Steichen guided the Eagles to the NFL's second-highest points per game average in 2022.

Glenn has spent the last two seasons with the Lions after serving as the New Orleans Saints' secondary coach from 2016-2020.

Our opponents are set! Secure the best seats & best benefits for next season, and be there live for exciting matchups against the Pittsburgh Steelers, Tampa Bay Buccaneers and more of the NFL's best opponents. Request more info or view our 3D Seat Viewer below!