Brown, 6-4, 253 pounds, joins the Colts from the San Antonio Talons of the Arena Football League where he competed in 10 games and recorded 34 tackles, 5.0 tackles for loss, 5.0 sacks, two fumble recoveries and one blocked kick. He spent the 2011 season with the Jacksonville Sharks of the AFL prior to joining the Hamilton Tiger-Cats of the Canadian Football League.

Peguese was signed by the Colts as a free agent on February 13, 2012. In 2011 he was originally signed by the Philadelphia Eagles as an undrafted free agent, but was released prior to the start of training camp. 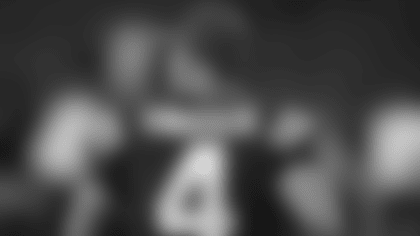 Vinatieri was a three-time first-team All-Pro and holds several NFL records. He spent 14 seasons with the Colts.

The Hall of Fame former Colts quarterback will host the annual awards show on Nov. 9 on ABC.

The Colts made the announcement ahead of Wednesday's first training camp practice.

Head coach Frank Reich sat down with Colts.com for a wide-ranging discussion on where the team stands ahead of the start of training camp this week at Grand Park in Westfield. The conversation is below and has been edited for clarity.

Colts Reunion Podcast: The Quarterback Robert Mathis Enjoyed Sacking The Most And Other Stories From His Career

Colts Ring of Honor defensive end Robert Mathis joined Jeffrey Gorman and Bill Brooks for this week's "Colts Reunion Podcast" episode to look back on his career and update fans on what he's up to these days.

Colts Ring of Honor offensive lineman Chris Hinton joined Matt Taylor and Bill Brooks on this week's installment of the Colts Reunion Podcast to discuss memories from his playing career – which was defined by much more than him being the guy the Colts acquired in return for John Elway.

Colts Ring of Honor defensive end Dwight Freeney joined Jeffrey Gorman and Bill Brooks for this week's "Colts Reunion Podcast" episode to look back on his career and update fans on what he's up to these days.

Taylor led the NFL with 1,811 rushing yards and was a unanimous first-team AP All-Pro in 2021.

Longtime Colts safety Antoine Bethea joined Matt Taylor and Bill Brooks for the latest installment of the Colts Reunion Podcast to reflect on his career and update fans on what he's up to now.

Get all 3 AFC South home matchups PLUS an exclusive "Blue" bobblehead for just $130!

GET YOUR PACK!
Advertising
The browser you are using is no longer supported on this site. It is highly recommended that you use the latest versions of a supported browser in order to receive an optimal viewing experience. The following browsers are supported: Chrome, Edge (v80 and later), Firefox and Safari.